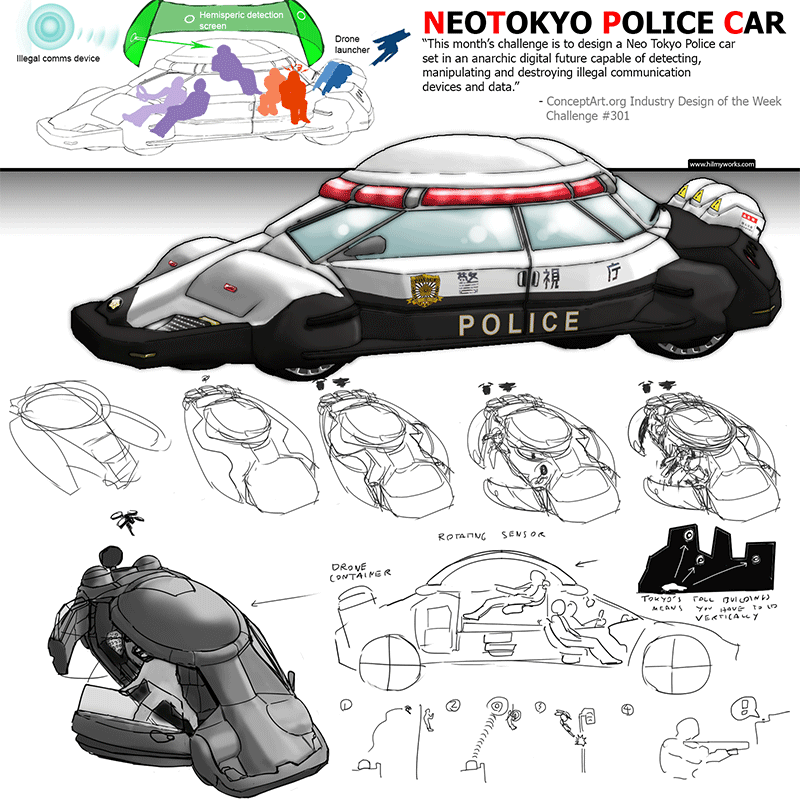 Tried out the Industrial Design Challenge of the Week at ConceptArt.org. The challenge is to design a police car made to track down illegal Internet comm sites.

Base idea was to have domed detector that can survey even tall buildings and pinpoint precise locations. Assuming futuristic Tokyo would be hard to navigate – with high-rises and complicated streets – drones will do the heavy work. The car will have a dedicated comms personnel surveying the site and managing the drones, while two police personnel will be able to go onsite and do arrests if needed.

A question was brought up regarding the nature of Tokyo’s streets: the driver side should be on the right, and the back alleys are narrow thus creating issues that need consideration.

Above was a visual explaining my answers to the problem:

1) Assuming futuristic cars run on Tesla-like batteries, all controls should be drive-by-wire. That means there’s no hard connection between the steering wheel and the drive train, thus there’s no real need to build a steering wheel shaft. The car thus can be assumed to be a generic model where either side can make the decision to drive, and the car extends or retract controls as needed.

While it would still make sense for the car to stick to one side for driving, the assumption is that police action requires redundancy. Thus if one side is occupied, the other side could take charge of driving.